I was delighted to announce the recent findings of a UK study at the prestigious American Society of Clinical Oncology annual meeting, held in Chicago between 2 and 6 June 2017. The results of this government-backed study clearly demonstrate that a balm containing polyphenol-rich bases and essential oils can significantly reduce chemotherapy-induced nail damage and improve nail-related quality of life in cancer patients.

Background to the study

Our nails are produced by living stem cells and, as these cells divide rapidly, they are especially susceptible to chemotherapy (Delaquis et al, 2002). 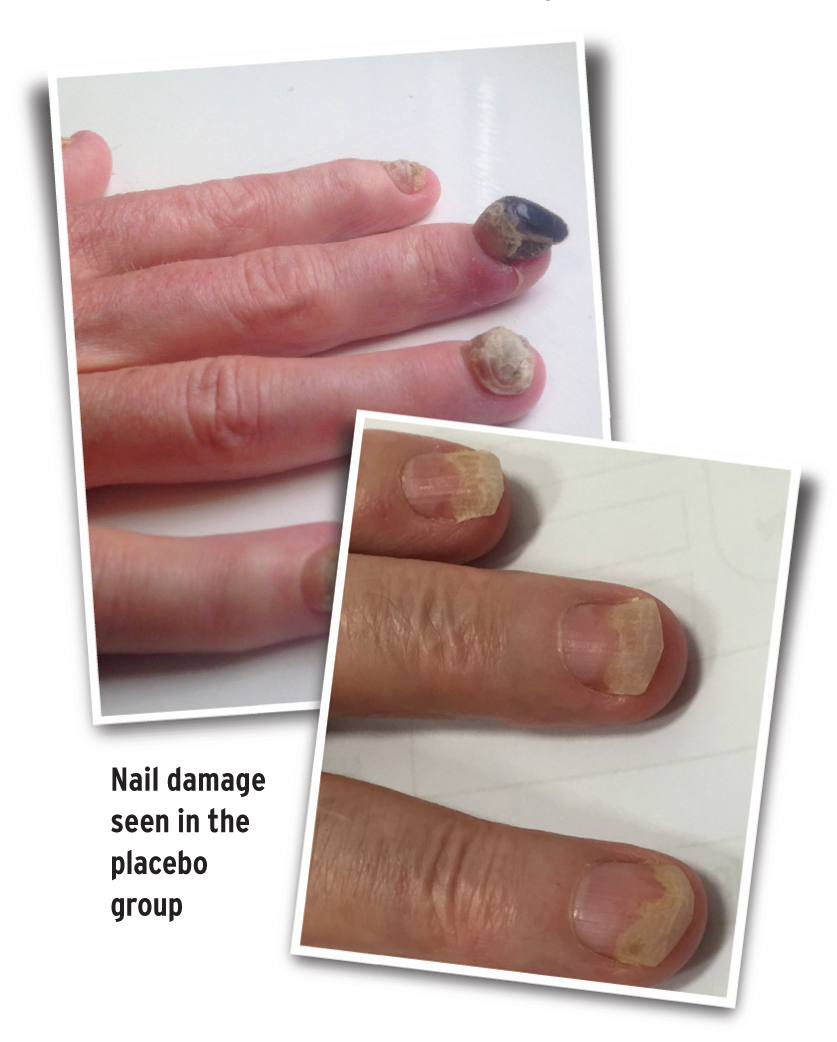 Chemotherapy drugs – which kill rapidly dividing cancer cells – cannot distinguish between cancer stem cells and other rapidly dividing stem cells. Consequently, a common side-effect of chemotherapy is nail disfiguration, especially following regimens containing taxanes, often used in the treatment of breast, prostate and lung cancer (Minisini et al, 2003). The type and severity of damage varies, but most intravenous (injected) regimens can cause ridges in the nails – called Beau’s lines – which correspond to the timings of chemotherapy treatment.

More pronounced chemotherapy nail damage leads to discolouration, brittle nails, acute paronychia (a soft tissue infection around the nail bed), onycholysis (loosening or separation of the nail from the nail bed) and sometimes even

complete loss of the nail. This damage is often unsightly and can contribute to body image issues during chemotherapy (Smith-Palmer et al, 2002).

More serious consequences include pain and secondary, systemic infection. The latter is a particular concern for cancer patients who have low levels of neutrophils, which are a type of white blood cell that fights infection.

It is believed that chemotherapy also damages the nails because of the drugs’ anti-angiogenetic properties (Ding and Thomas, 2010; Wasner et al, 2002; Battegay, 1995). An anti-angiogenetic drug stops cancers from growing blood

vessels, which slows cancer growth and can shrink tumours. If blood supply to the nail stem cells is impacted in the same way, this can cause the nails to separate from the nail bed, causing pain, and secondary bacterial and fungal infections (Ding and Thomas, 2010; Wasner et al, 2002; Battegay, 1995).

A number of anecdotal strategies to protect the nails are currently given to patients during chemotherapy, including nail hygiene and avoiding trauma. Some years ago, I co-authored a report that showed cooling the nail beds, by

placing the hands in iced water during chemotherapy treatment, helps reduce the severity of nail damage (Ding and Thomas, 2010). Understandably, the practice never caught on within the confines of a busy chemotherapy unit. Special cooling gloves are available, but these are not popular among UK chemotherapy nurses as they cover the veins of the hands and prevent assessment of the patient’s extremities (Ishiguro, 2012; Scottie et al, 2005).

Many patient advocacy groups advise massaging moisturising balms around the nail bed, on the assumption that oiling the cuticles could help prevent splitting. Although this seems intuitively beneficial, there are no studies to support this practice or advise which balms are most suitable.

Patients are also often advised to wear nail varnish; however, many nail polish removers dry the nails. And again, no published prospective trials support this practice during chemotherapy, or in an otherwise healthy population.

With this background and lack of evidence in mind, a scientific committee was formed to review existing data, develop a potential solution and design a major randomised controlled trial to investigate its effectiveness. The committee consisted of oncologists, dermatologists, nurses, statisticians and patients from Bedford, Cambridge, Bristol and London. The study was designed with the help of the independent government-funded body, The National Cancer Research Network (clinical trials development team), which ensured it had the highest possible standard of scientific structure. It was audited by an external agency to ensure full compliance and approved by the Cambridge Central Research Ethics Committee.

The scientific rationale for the bases, waxes and essential oils chosen for the balm in this study – PolyBalm – is described below. All these natural ingredients are particularly rich in phytochemicals, especially from the phenolic polyphenols group.

It was hypothesised that by regularly applying a balm containing these natural ingredients it would act as a local antidote to the chemotherapy, preventing damage to the proliferating stem cells.

In addition, the antimicrobial properties of the balm would help prevent secondary infection. Using natural oil bases, rather than synthetic creams, also avoids the use of chemicals such as perfumes, parabens and preservatives, which may cause irritation.

Cocoa seed butter (Theobroma cacao) and shea nut butter (Butyrospermun parkii) have been approved by the US Food and Drug Association (FDA) as natural base ingredients in cosmetics and creams (Federal Register, 2003). Both are considered to have restructuring and regenerating properties.

The main components of beeswax (Cera alba) with propolis are palmitate, palmitoleate, hydroxypalmitate, oleate esters, aliphatic alcohols, with the ratio of triacontanyl palmitate to cerotic acid (the two principal components) being 6:1. Even after processing, beeswax still remains a biologically active product, retaining some antibacterial properties. It has been used in cosmetics and remedies for years as a thickening agent, emulsifier and humectant. Allergies to beeswax are rare (Jensen and Andersen, 1999; Rogers and Bekic, 1997).

Wintergreen oil (Gaultheria procumbens) is a natural salicylate, which reduces inflammation and has the potential to reduce the discomfort associated with nail damage. Although concerns have been raised that the regular use of creams with higher salicylate quantities can cause irritation (Delaquis et al, 2002), the balm used in this study contains the form derived from the natural plant and in low concentration.

The study was a double-blind randomised controlled trial, involving 60 male and female patients receiving chemotherapy for breast or prostate cancer. All 60 patients had started cytotoxic chemotherapy or were to begin treatment in less than two weeks, with 50 receiving taxanes (Taxotere or Taxol).

Half of the patients were asked to massage a small amount of petroleum-based moisturiser (placebo) to the nail area three times a day. The other half were asked to do the same with the Polybalm (intervention).

The health of the nails was measured by four independent tools at baseline (the start of the study) and three weeks after the patients’ last injection of chemotherapy.

The patients recorded their own nail health with the validated Dermatology Life Quality Index Questionnaire (DLQQ), plus a simple linear severity scale (LSS), which focused on how nail damage affected their daily activities and quality of life.

The physicians recorded the physical condition of the patients’ nails using the validated Nail Psoriasis Index (NPSI), plus another simple LSS. As well as directly scoring nail damage, photographs of the nails were sent to three doctors from other departments and hospitals for further independent verification.

The results showed that for all but one of the 30 patients in the Polybalm (intervention) group, there was virtually no nail damage, compared with more than half suffering significant nail damage and distress in the placebo group. The single patient in the Polybalm group who had moderate nail damage also suffered from other severe chemotherapy complications including neutropenic sepsis, diarrhoea and peripheral neuropathy. The more complete data is reported in the table presented in this article.

The study showed that the application of the polyphenol-rich Polybalm profoundly reduced chemotherapy-related nail damage and improved nail-related quality of life compared with a petroleum-based moisturiser. The 180-fold improvement in nail-related quality of life will be welcomed by patients suffering this unwelcome toxicity, which would otherwise significantly affect up to half of people receiving chemotherapy. The precise mode of action of this balm would require further investigation, but it is likely to be of great interest to the general population looking for healthy nails – the trial committee certainly have no concern over its non-oncology use.

It is also worth noting that the balm works best when used regularly from the onset of chemotherapy; however, it is still likely to aid recovery if damage has already started.

This was a non-commercial study, and no research team member received payment to recruit patients into it. Although these products were evaluated in a scientific study, the FDA and the UK’s Medicines and Healthcare Products Regulatory Agency have classed them as cosmetics and, as such, they are not licensed medicinal products. Thus, Polybalm cannot be recommended for any medical condition nor its makers claim any health benefits. Polybalm should not be considered as an alternative medical treatment and should never be used against medical advice. Polybalm is now distributed by an independent organisation (via polybalm.com).

With thanks to Professor Robert Thomas, consultant oncologist at Bedford and Addenbrooke’s Hospitals, and author of Lifestyle and Cancer: The Facts (2011). For more information about Professor Thomas and the Polybalm trial, visit cancernet.co.uk/polybalm.htm

18 Shakespeare Business Centre, Hathaway Close, Eastleigh SO50 4SR | Contact | FHT is a trading name of the Federation of Holistic Therapists who is authorised and regulated by the Financial Conduct Authority (FCA) under firm reference number 502095. You may check this on the Financial Services Register by visiting the FCA's website, https://register.fca.org.uk or by contacting the FCA on 0800 111 6768. | Registered in England and Wales, No. 02864349. Registered office: Chilworth Point, 1 Chilworth Road, Southampton, SO16 7JQ. | © 2020 Federation of Holistic Therapists | Terms and Conditions | Privacy policy | Complaints