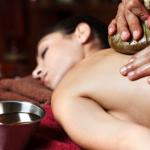 Ayurveda is an ancient Indian holistic system, based on achieving physical and mental harmony with nature and has been practised for more than 5,000 years. Ayurveda quite literally translates as ‘science of life’ (‘Ayu’ meaning life and ‘Veda’ meaning science), and was first recorded in the Vedas, the world’s oldest surviving literature.
Ayurveda sees everything in the universe, including human beings, as composed of five basic elements – space, air, fire, water and earth. These five elements in turn combine with each other to give rise to three bio-physical forces, or doshas, within the human body – vata (air and space), pitta (fire and water) and kapha (water and earth). Together they are known as tridosha.
Ayurveda is used according to a person’s dosha using a system combining diet, herbal remedies, yoga, ayurvedic massage, lifestyle routine and behaviours which may stimulate positive emotions.
As with all treatments, a full consultation should be completed with your therapist to ensure that Ayurveda is right for you.

© 2020 FHT. No part of this document may be reproduced by any other individual or organisation, without the express permission of the FHT. Although the FHT has taken all reasonable steps to ensure that the information in this document is accurate, we cannot guarantee that it is free from inaccuracies, errors or omissions. No information given by the FHT should be taken as legal advice, nor should it take the place of medical care or advice given by primary healthcare providers. The FHT shall not be liable for any loss or damage whatsoever arising from any information contained in this document.

To find an FHT member in your area

18 Shakespeare Business Centre, Hathaway Close, Eastleigh SO50 4SR E. info@fht.org.uk | FHT is a trading name of the Federation of Holistic Therapists who is authorised and regulated by the Financial Conduct Authority (FCA) under firm reference number 502095. You may check this on the Financial Services Register by visiting the FCA's website, https://register.fca.org.uk or by contacting the FCA on 0800 111 6768. | Registered in England and Wales, No. 02864349. Registered office: Chilworth Point, 1 Chilworth Road, Southampton, SO16 7JQ. | © 2020 Federation of Holistic Therapists | Terms and Conditions | Privacy policy | Complaints